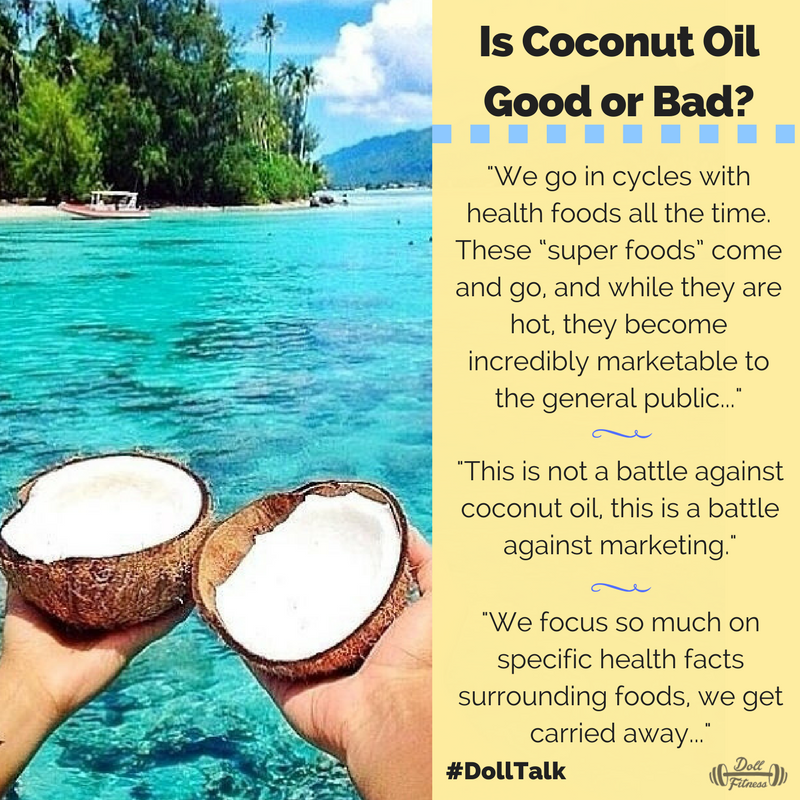 A study has recently been released from the American Heart Association explaining how coconut oil is to be considered as unhealthy as butter and animal fat due to the nature of its high saturated fat content. Diets high in saturated fat lead to increased risk for high blood pressure and high cholesterol. Saturated fats can clog up your arteries, create hypertension, and can leave you at risk for a heart attack. Other foods high in saturated fat would be deep fried foods, baked goods, palm oil, chips, popcorn, basically all the goodies the average person binges on in front of the TV. So this is an interesting predicament we have here don’t we? Who is right? Dieticians/Nutritionists/Bloggers or doctors?  I’m sure this study has already caused some heated lunch room debates over whether or not we should continue to use the Costco sized coconut oil in our pantry or toss it for good. I obviously and unsurprisingly have an opinion on this, and my outlook is based on something I have witnessed in our health food industry since I can remember.

We go in cycles with health foods all the time. These “super foods” come and go, and while they are hot, they become incredibly marketable to the general public because someone decided to release a study on the health benefits of said food, and labelled it a super food. A blogger or a celebrity, someone influential, picks it up and swears by it which eventually makes it go viral. Smaller companies start popping up bringing out food products revolving around this particular “super food”, and then grocery stores start changing their shelves to make this hot item more attractive. Literally an isle at the grocery store dedicated to coconut oil, and that’s because it’s now “healthy”. However, coconut oil has always had its health benefits, just as much as it’s always been “unhealthy” due to its high saturated fat and caloric content. It’s just the market and food advertising industry that has made is “super” in the first place.

Flaxseed oil, Manuka honey, almond milk, cocoa nibs, chia seeds, Garcinia Cambogia, acai, apple cider vinegar, probiotic yogurt. Super foods and fads come and go all the time, we are just so bamboozled by the new super food that we forget the old and move onto the new. I mean shit, I remember there was a period of time when Activia yogurt was the only yogurt you should buy because it was the first yogurt that effectively advertised it contained probiotics. They advertised probiotics to be the holy grail towards a skinnier bod.  It had that commercial with the purple dots representing your digestive tract and the girl was doing a belly dance. People were jacked up, they wanted dancing bellies too. Activia was flying off the shelves and I saw it in almost every constipated kids lunch box. But listen, the fact probiotics have the potential to make you poo is something you could easily google and you will find research to support this. It’s just that Activia was the first to market this fact extremely well. However, eventually people caught onto the sugar content of Activia and then all of a sudden it was “Activia: Weight Loss or Diabetes?”. I just made that headline up, but I’m sure you can see the similarity to the recent coconut oil study. There could always be pros, there could always be cons, but when the general public is involved and things get out of hand, these cons start to become a lot more problematic than the previously celebrated pros. We focus so much on specific health facts surrounding foods and we get carried away, sometimes neglecting other true facts about foods such as a high saturated fat and caloric content which ultimately impacts your overall health if you are not careful. Here is something you need to know about the general public when it comes to their health…the average person thinks about their health, they care about it a lot and it’s always in the back of their minds. However, a solid 9/10 people want a quick fix because they do not have the time (what this really screams is they have not made their health a PRIORITY). That’s just the sad fact, we put convenience over our health constantly, and that’s why we are so incredibly vulnerable to food marketing, and especially “super food” fads. We are desperate as shit to be healthy with as little effort as possible…and marketing gurus know this.

Listen, if I were to tell a co-worker who is; 1) currently struggling with their health, 2) has a hard time getting to the gym, and 3) doesn’t eat a healthy diet, that if they added 1 tbsp. of coconut oil to their AM coffee and blended it up, it will help them burn fat and give them tremendous energy…they are 100% absolutely fucking doing that. What they will NOT DO however, is cut out their; 1) weekend drinking, 2) deep fried food, 3) junk/crap food, and 4) their highly processed, never expiring, purely plastic, Starbucks sandwich they consume everyday on their 30-minute lunch break. Why? Because adding coconut oil to their coffee is easy and changing their entire lifestyle is definitely not.

(Side story for you: I used to work at Starbucks for a while and one of my tasks was to throw-out the display pastry’s and sandwiches and change them with new ones, but I never did, and they never went bad).

So here we have a massive population of people who already have existing health issues such as high cholesterol from a shitty diet, or who are just incredibly inactive. This same population are now adding coconut oil loaded with saturated fat and high calories to their AM coffee because their favourite nutrition blogger said it will give them more energy and make them healthy. What people do not seem to grasp is that weight loss is never just one thing. It’s never one pill, or one exercise, or one super food…it’s what you do every day, 98% of the time, out of your week/month/year/entire life.

I personally don’t think it’s surprising a study has come out discouraging coconut oil use if you look at the general picture of this study. There has been such a massive increase in the demand for coconut oil, and it’s been absolutely everywhere and in everything. Due to this fact, Doctor’s offices across the nation have probably seen a massive spike in cholesterol issues, which could be why the health board brought out a study highlighting the dangers of consuming too much saturated fat. It can’t be all sunshine and rainbows, something eventually had to be said about the dangers of consuming too much coconut oil. I believe the study compares coconut oil to butter and animal fat because it’s more common knowledge to the average person that consuming copious amounts of butter is generally not beneficial towards their health. So then why are we being encouraged to consume copious amount of coconut oil? This article is not saying butter is “bad for you”, it’s simply using a comparison people are not as starry eyed over and can comprehend better. So what does this all mean? Does this mean all past studies highlighting the benefits of coconut oil are complete garbage? No. Does this mean coconut oil should be banned from your diet and avoided by all means? Not necessarily. The study released stating coconut oil is “unhealthy” is merely trying to protect the health of the naive and confused general public from something that does provide some health benefits when enjoyed in moderation. This is not a battle against coconut oil, this is a battle against marketing, the food industry, and the naivety of the general public to become healthy as quickly and effortlessly as possible.

What I would argue with this study is that they should emphasize that although there are numerous health benefits to coconut oil, if you are not changing anything about your current everyday diet or activity levels then adding saturated fat to an already highly saturated fat diet will not turn you into a health unicorn. Instead it could potentially kill you by giving you a heart attack, and a high fat diet does run the risk of a higher calorie diet, therefore potentially contributing to more weight gain and body fat. It’s totally fair for the medical industry to highlight the fact coconut oil is high in saturated fat, and maybe they had to take a really hard stance against it for people to shift their thinking a bit. I mean, I read a study somewhere that you should not cook in olive oil, and instead cook in coconut oil because olive oil turns into “bad fat” when heated, and coconut oil doesn’t. But coconut oil has a higher saturated fat content than olive oil. So now we have one study saying avoid it, but then another saying when it would be a good time to use it. Confusing as shit.

At the end of the day, it’s never the “super food of the moment” that will make or break your health. It’s what the average person is doing with 98% of their time. Coconut oil is not going to be your health saviour but it also doesn’t mean it’s your killer. Super foods come and go all the time, and I am sure a new super food will be in coconut oils heels and we will be all over it. Pay attention to how foods are marketed and advertised to you. If there are studies proving coconut oil has health benefits, then it has health benefits. Just keep in mind it is high in saturated fat, and diets high in saturated fats are more likely to cause cardiovascular issues which needs to be highlighted for societies health and protection.