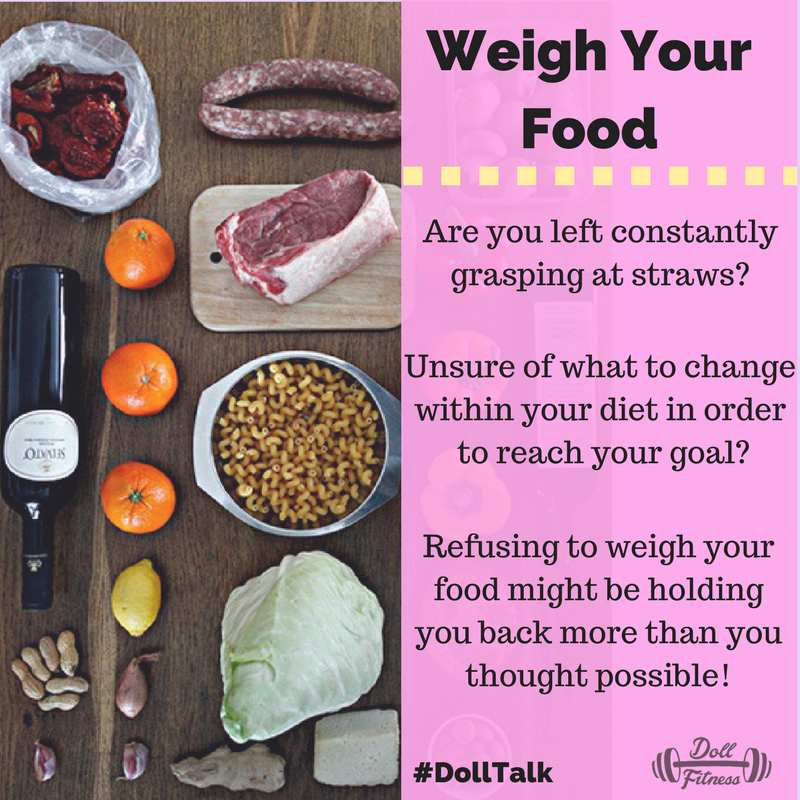 Weighing your food comes with a lot of negative opinions and assumptions. It is shocking such a simple, small act of health can create so much controversy. When people hear someone is on a plan that requires them to weigh their food, it is often met with criticism, a few scoffs, and a lot of negative comments. Comments such as, “you don’t live.”, or “that’s so extreme, are you okay?”, or “You will never keep that up, carrying a scale around isn’t normal behaviour”.

On the flip side, that skinny tea detox or juice cleanse isn’t extreme at all! No one bats an eye! Or how about fasting for totally non-religious reasons but actually more as a starvation tactic…somehow not extreme! Nope, society doesn’t think severely impacting your metabolic rate or ability to burn fat due to malnourishment and starvation tactics isn’t completely fucking crazy. But on the other hand, someone starts to weigh their food to ensure they have the appropriate portion size in an attempt to avoid joining our gluttonous, obese society…THAT’S TOO FAR!

At the end of the day, whether it’s your family chirping you, friends, or co-workers, ultimately these people do not understand the process of weight loss. They are choosing to ignore the science-based, research laden reasons as to why you should take the small extra step of weighing your food before you put it in your mouth. It’s not extreme, it is actually smart and very purposeful towards the overall goal, which is to lose weight. Too many people go at the process blind. They do not keep track of anything, never reach their goal, and unfortunately are not too sure why they didn’t reach it either. So instead, these people would rather opt to never keep track of their progress. They would rather leave everything up in the air as to what may have worked, and what didn’t work. They are too scared to commit to something they have never tried before. People who protest against weighing food do not want to sacrifice any part of their lifestyle they strongly believe will be affected by the one thing they have never tried. If they had attempted it, they would know it did not severely impact their everyday schedule, and has only brought them closer to achieving their goal.

HERE ARE MY REASONS AS TO WHY YOU SHOULD WEIGH YOUR FOOD:

Where people get their panties in knots is the expectation you will be carrying a scale with you for the rest of your life, everywhere you go. Obviously, these types of people are missing the mark and are ignorant. I do not carry a scale with me, I have never done so and I never will. If the entire process is done correctly off the hop, the less you will struggle with other dieting tactics in the future. You will arrive at your goal a lot sooner, because the entire process has been done in a structured, calculated, and CONTROLLED manner. It’s playing the long game, and the long game comes with sacrifice, commitment, dedication, and a relentless attitude towards your goal. A 15 second sacrifice and investment into your health now for a lifetime of happiness…seems like common sense to me.